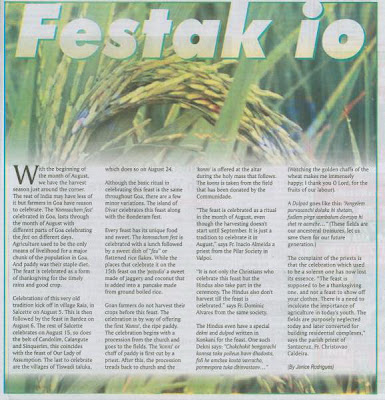 With the beginning of the month of August, we have the harvest season just around the comer. The rest of India may have less of it but farmers in Goa have reason to celebrate. The 'Konnsachem fest' celebrated in Goa, lasts through the month of August with different parts of Goa celebrating the fest on different days. Agriculture used to be the only means of livelihood for a major chunk of the population in Goa. And paddy was their staple diet. The feast is celebrated as a form of thanksgiving for the timely rains and good crop.
Celebrations of this very old tradition kick off in village Raia; in Salcette on August 5. This is then followed by the feast in Bardez on August 6. The rest of Salcette celebrates on August 15, so does the belt of Candolim, Calangute and Sinquerim, this coincides with the feast of Our Lady of Assumption. The last to celebrate are the villages of Tiswadi taluka,
Although the basic ritual in celebrating this feast is the same throughout Goa, there are a few minor variations. The island of Divar celebrates this feast along with the Bonderam fest.
Every feast has its unique food and sweet. The konnsachem fest is celebrated with a lunch followed by a sweet dish of "fau" or flattened rice flakes. While the places that celebrate it on the 15th feast on the 'patodio' a sweet made of jaggery and coconut that is added into a pancake made from ground boiled rice.
Goan farmers do not harvest their crops before this feast. The celebration is by way of offering the first 'Konns', the ripe paddy. The celebration begins with a procession from the church and goes to the fields. The 'konns' or chaff of paddy is first cut by a priest. After this, the procession treads back to church and the 'konns' is offered at the a tar during the holy mass that follows. The konns is taken from the field that has been donated by the Communidade.
"The feast is celebrated as a ritual in the month of August, even though the harvesting doesn't start until September. It is just a tradition to celebrate it in August," says Fr. Inacio Almeida a priest from the Pilar Society in Valpoi.

"It is not only the Christians who celebrate this feast but the Hindus also take part in the ceremony. The Hindus also don't harvest till the feast is celebrated." says Fr. Dominic Alvares from the same society.
The Hindus even have a special dekni and dulpod written in Konkani for the feast. One such Dekni says: "Chokchokit bangarachi konnsa taka polleun havn dhadosta, foil he amchea koxta vavracho, pormespora tuka dhinvastanv ... " (Watching the golden chaffs of the wheat makes me immensely happy; I thank you 0 Lord, for the fruits of our labour).

The complaint of the priests is that the celebration which used to be a solemn one has now lost its essence. "The feast is supposed to be a thanksgiving one, and not a feast to show off your clothes. There is a need to inculcate the importance of agriculture in today's youth. The fields are purposely neglected today and later converted for build.ihg residential complexes," says the parish priest of Santacruz, Fr. Christovao Caldeira. 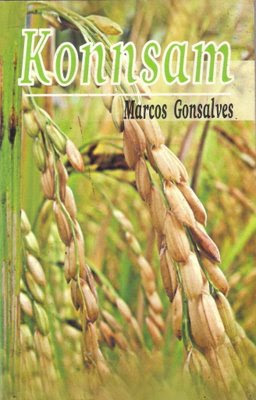 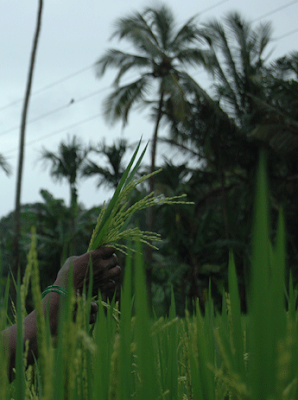 Agriculture has not only an economic significance to the farmers but is also a part of their social and cultural set up. It is a time when the harvest is associated with some religious and social event that brings the people together. People from different states in India celebrate the harvest festival that go by different names like Baisakhi, Pongal, Makar Sankarant, Onam etc Come August the farmers in Goa are ready to harvest their fields. The first sheaves are officially cut by the priest and offered to God. In almost all the parishes of Goa it is only after the first ‘Konsa’ or sheaves are offered to the Lord that the harvesting begin. The tradition of offering the first sheaves of the crop to the Giver signifies respect and thanksgiving. This feast, also known as the feast of Novidades, is a fine example of the coming together of two religious communities -the Catholics and Hindus. The feast is called Novidades (meaning new in Portuguese) because it symbolises a new beginning. Farmers never venture into harvesting before the ‘Konsache fest’.
The Church of Raia in Salcette is blessed with an ancient history (winding back to 1699) like many other churches in Goa. An important part of the feast of Our Lady of Snows Church, Raia, fondly called the ‘Neves Saibinche fest’, is the cutting of the first corn.
On the day of the feast, just before the high mass, celebrant of the mass (the church priest) along with the villagers gather at a field around a hundred meters away from the Church, called ‘Saibinche Kongi’. The blessing occurs after the eight o’clock mass. The priest says a prayer and blesses the crops. Later a few sheaves are tied into bundles and placed outside the Church informs Marcus Gonsalves from Raia.
After the high mass people take home a sheaf from the bundle of blessed ‘Konsa’ (sheave). The sheaves are placed at the altar; some put the ‘Konsa’ in their cars as a sign of a symbolic protection.
“Later a small bundles of sheaves are tied together and sent to the Governor’s residence, the Archbishop’s Palace, communidade and municipality,” says Mr Nazareth, a former sarpanch of Raia.
The older folks recall how people used to buy new clothes just for the occasion. However, nowadays people do not have the same enthusiasm. Probably because it is only the farmer who realises the joys of harvesting and it is really only to him that the feast holds a deeper meaning.
Many parishes in Goa celebrate the Konsache fest. At Santa Cruz and at various other parishes in Tiswadi, the feast falls on August 24. At Taleigao it is celebrated on August 21. The blessing of the ‘konsa’ is done at designated fields. At Santa Cruz it is at ‘Segundo Bairo’ and ‘Cujera’. A brass band follows the priest to the location playing devotional songs on the way. In Saloi a small stretch of land in front of the Church is specially sown for the Konsache fest.
In a few parishes there is no blessing of the crop instead a mass is said to commemorate the occasion. This, sadly so, because people no longer grow crops in the designated field.
On the occasion, people prepare ‘fov’ a dish made from the pounded rice.
Earlier we used to help the family put rice that has been boiled and dried in a hole in the ground and thrash it with a stick to make ‘fov’. Now it is done at the mill says Alexander from Merces. The rest of the day proceeds like any other feast day with tables spread with the very sumptuous ‘sannas’ and ‘sorpotel’. The village witnesses football or volleyball matches and sometimes a coconut breaking competition.
All in all the entire village gathers to mark the first day of harvest.
Posted by Goa-World.COM at 10:33 PM

Book Marking. The links built by us has not only high acceptable rates but also the links are permanent. Our Ethical way of SEO link building is going to surely bring your website on top position.

Thank a lot for this post that was very interesting. Keep posting like those amazing posts, this is really awesome :)
Looking for Car Rental Goa, visit on:
Taxi Hire Goa
Car Rental in Goa

Thank a lot for this post that was very interesting. Keep posting like those amazing posts, this is really awesome :)
Looking For Car Rental Goa, Visit
Goa Car Rental

Thank a lot for this post that was very interesting :)
Looking For Bike Rental in Madgaon Goa, Visit
Bike Rental Near Madgaon Railway Station